The key variable in traffic congestion — and in numerous other factors that collectively determine our quality of life — is VMT, or vehicle miles traveled.

California SB743 (2013) changed the way climate impact will be analyzed for projects (CEQA analysis). The effectiveness of transportation networks had been analyzed by LOS: Level of Service, which determined how well the system served drivers – reducing gridlock etc. SB743 kicks in in 2020, and requires that transportation be evaluated using VMT’s instead: decreasing the amount of driving is now the greatest good, rather than increasing the speed with which drivers can move through the system.

People travel in widely varying amounts, depending on a number of factors. The most important factor is population density. This map of Sonoma County shows how much the per capita annual vehicle miles vary according to density. In the map, zones are color coded according to average annual per capita VMT. 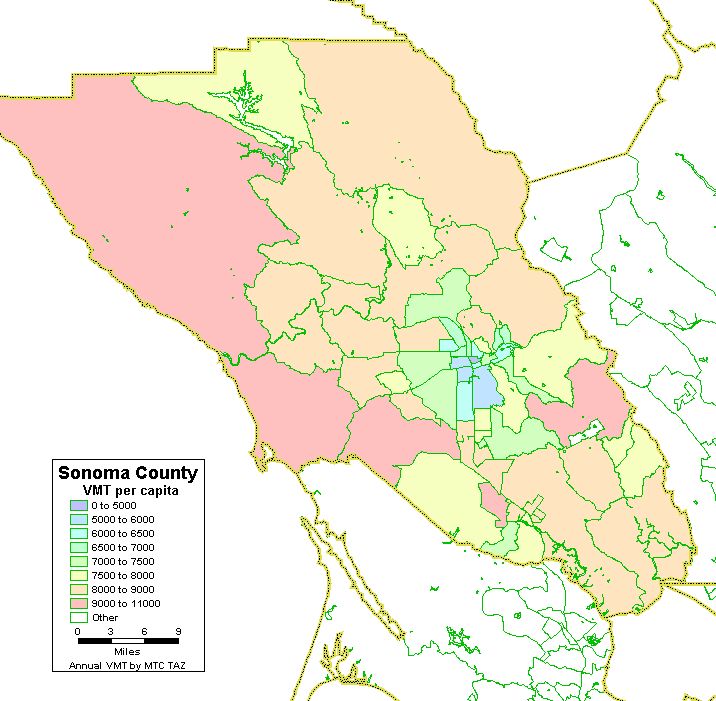 The zones are Sonoma County’s portion of the Metropolitan Transportation Commission’s 1099 Travel Analysis Zones (TAZ), which cover the San Francisco metropolitan area. Figures for vehicle miles were obtained from odometer readings that come from the smog check program.

The importance of reducing VMT by 1% per year

by Steve Birdlebough Many cities and counties are adopting emergency declarations regarding the Climate Disruption crisis. Some places have shown progress in reducing greenhouse gas emissions from their water and power sectors, however it seems much more difficult to reduce ...
Read More