A Rail System for the Counties of Sonoma and Marin

Normally in an area as rural as Sonoma or Marin, which have very low overall densities, rail would be hard to justify. But with most urban development clustering close to a single travel corridor, andwith land use rules intended to concentrate further development, rail service makes sense here.

Although sprawl has been occurring in Sonoma and Marin counties as it does almost every place else in the U.S., it could be worse. These counties still have density patterns that are somewhat nodal, as can be seen in the map below. 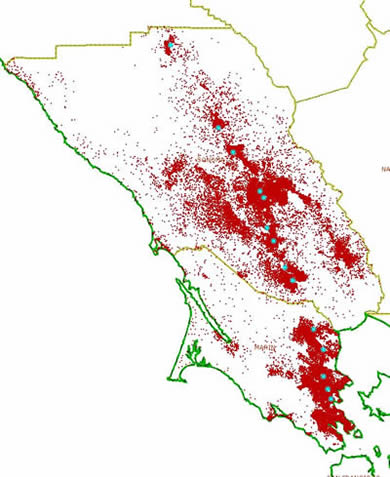 With Urban Growth Boundaries in place, coordinated development of transit and Transit Oriented Development around rail stations can augment this historical pattern to bring it back toward the nodality that once existed. Both counties have accomplished a lot in preserving their beautiful rural lands. Now is the time to focus on exceptional towns and cities.