Santa Rosa is the only city in Sonoma County which continued charging for parking during the long hiatus that accompanied the enthusiasm for autos and sprawl development. The other cities either never charged or gave it up.

There is ample free parking throughout most of Santa Rosa. There are three hotspots where parking demand approaches the available supply, and simply providing more free parking isn’t feasible: 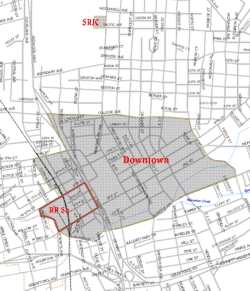 The key map at right shows the location and extent of each of these hotspots. The situation for each is summarized here.

The small area labeled “SRJC” is not the entire college, but just the area that contains a huge parking structure. The project is a classic example of attempting to solve a transportation problem with a parking solution. It was made possible by the generosity of the County’s citizens, who voted for a local bond measure entitled “Santa Rosa Junior College Repair and Safety Measure.” It promised many capital improvements and repairs projects. Tucked away at the bottom of the list was this:

“New parking spaces at all locations” immediately became a very large parking structure at one location that far exceeded the budget for item G for the entire County. In the ensuing EIR process many transportation alternatives were recommended by respondents, but all were rejected, because they didn’t result in more parking.

Like the Junior College, the City of Santa Rosa has tried to answer questions of access to its downtown with ever more parking. Perhaps that could change.

According to the City’s map, Railroad Square is part of the downtown. Given that the area is the site of Santa Rosa’s primary train station, where the emphasis is to be on access by means other than cars, it needs to be treated as a separate entity in regard to parking.

The fact that the City has taken on an MTC funded demonstration study of the area around the station gives reason to hope that the area might well have rules of development and access that are different from the downtown, and more appropriate for a primary transit hub.